Hello! Thank you for your interest in my novels and worlds! I would be happy to help you find any information you may need to make this easy. Please find below a selection of information and images about the author and current works, and use the contact page (or button below) if you need something I do not have here.

At a young age, Deborah's rampant imagination kept her up, lending great detail to all the terrible things lurking in the night. In desperation, her mother suggested she invent her own stories to distract her brain. She has been doing that since, channelling her ideas into mainly sword and sorcery-style fantasy novels and shorts.

"Dragon's Voice" landed in the YA self-published world in November 2019 and was featured in the Greater Victoria Library's Emerging Author program in 2020/2021. Book 1 of the Weapons of Espar series (Dragon's Talon) came out May 2020, with Book 2 (SoulBurner) in March 2021.

She has published additional short stories on Kindle and in anthologies.

In her other life, Deborah is a veterinarian. She lives in Sooke with her husband of 12+ years, their two sons, and three demanding felines.​ 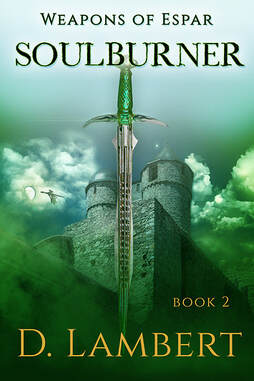 ​One last chance to free Espar...

​     Although they have chased the Lionian Sovereignty from the capital, King Danoron and DragonKeeper Cairon know they have only bought time. First, they must clear the Lionian conquerors from the rest of Espar.  If they survive that, they must repel the Sovereign's army, which will arrive before spring to reclaim the territory. The rabble that became an army in Danoron's name is not ready to face the full force of the Lionians and their dragon fleet.
And unbeknownst to any other, King Danoron faces his own challenges. The souls within SoulBurner, the blessed sword of kings, have awakened. Some wish to help him. Others seek to destroy him, his line, and everything in Espar. Fighting back pushes the borders of sanity for the fledgling king, threatening everything they have accomplished. 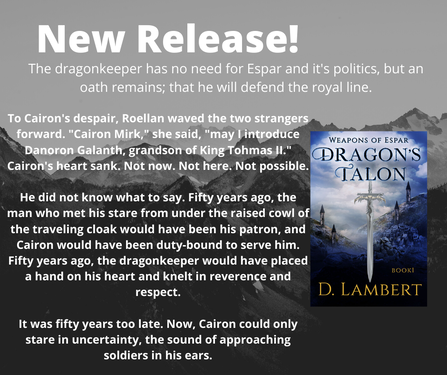 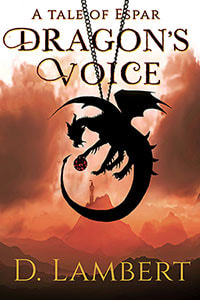 First in the world of Espar! A fantasy adventure for young adults (or the young-at-heart!)

Sair Mirk was just a small time thief until he stole the wrong magic amulet. Now the dragons of Dragon Pass want him as their voice and have sent him to the capital to convince the King of Espar not to build his border towers near the Pass.

In order to reach the king, Sair must convince Heir Durrek to take him seriously, a task made more difficult the farther into court politics Sair, an ungracious errands boy, falls. Alienating the heir seemed like the worst thing he could have done, but in doing so he also stumbled into an assassination plot against the king. Untangling the threat endangers the existence of magic in the world, and Sair is at the heart of it.

​Now even dragons cannot save him.

A promise that brings war...
​
When the king was killed by his advisor, only the DragonKeeper knew the truth. She was exiled and, without her support, the Kingdom of Espar fell to the Lionian Sovereignty.
Fifty years later, Cairon Mirk is the DragonKeeper, and he has little sympathy for the Esparans who abandoned his grandmother. But an oath remains, that he will defend the line of the Kings of Espar. When he stumbles across Danoron Galanth and his sister Gensiana, helping the Heirs of Espar enrages the Sovereignty and brings a bounty onto the heads of dragons. To save his dragon family, Cairon must abandon his isolated life and do battle with the invincible Lionian Sovereignty.
But the Sovereignty does not act alone. Traitors hide among the Esparan rebels. New weapons are raised against the dragons, able to burn even a silver's scale. And an enemy of the past has come to end both Cairon's reign as Dragonkeeper and his life.
​
Contains Violence, death 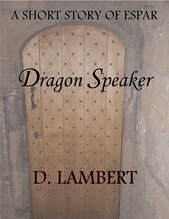 Click on image to go to Kindle
Published: Independently published (Oct. 15 2019)
As Master Wizard Foran Kinotela prepares to embark upon a quest to save magic, he is the victim of a theft. Finding the stolen enchanted amulet is simple; it's around the thief's neck. But as he moves to take back his goods, the thief stumbles into a potential alliance for Foran's quest.

Will the dragons listen to him, or to the thief?