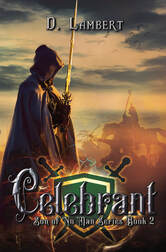 Click here for ebook preorders
Series: Book 2 of the SON OF NO MAN
Title: Celebrant
​ Release date: Dec 15th, 2021
​
The line between enemy and ally blurs…

Tohmas Galanth has arrived in the north, outnumbered on every front. To fulfill his commitments to his besieged uncle, the hordes must be stopped, but DoomDragon is no easy foe, and Tohmas' battles are fought in steady retreat.

Tohmas faces assassinations, betrayals, spies, and the crumbling morale of his trapped men as he seeks to end the decade-long war. His staunchest allies will become his greatest threats as the winter looms.

In the north, the winds blow cold. Do we compensate with hot tempers?
​                - Darknim DoomDragon, Dragon of the North and leader of the Eidenlandsa.
CLICK HERE TO BUY
Proudly powered by Weebly